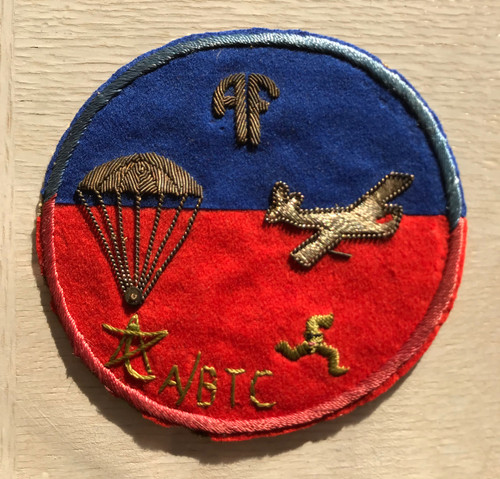 The Fifth Army Airborne Training Center was established in 1943 at Les Angades Aerodrome near Oujda, Morocco. Employing a training program modeled on that of the Parachute School at Ft. Benning, the Training Center’s mission was to provide parachute training in the Mediterranean Theater of Operations (MTO). In addition to training replacements for American airborne units, the facility provided training for the OSS and for French airborne units based in the MTO.

The approved insigne for Training Center personnel was the Allied Force Headquarters or the Fifth Army shoulder  sleeve insignia with unattached AIRBORNE tab, gold-on-black with the former, white-on-blue with the latter. One of the Training Center’s officers designed and procured locally—in Sicily or in Italy—an unauthorized jacket patch that bears a representation of the US parachute qualification wing surmounted by the letters AF, all in bullion. Having spoken with a number of veterans of the Training Center, I have concluded that distribution of the jacket patch was very limited, probably going only to some of the officers. A US-made version of this patch exists that is usually identified as that of the Airborne Training Center, Sicily. Though apparently dating from the period, the evidence indicates—clearly, I feel—that the US-made version was made for veterans and/or collectors [1].