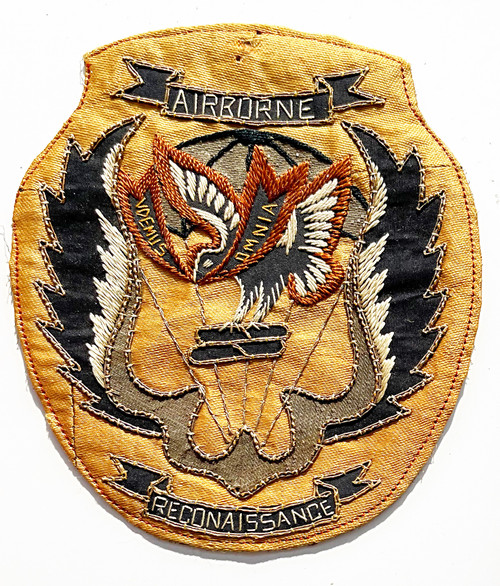 published in: Hero's in our midst airborne page 224

from the Sycamore LTD collection

Our particular unit, referred to as the Provisional Reconnaissance Platoon, 11th Airborne Division, was privileged to spearhead this liberation effort. The unit was also the recipient of two Distinguished Unit Citations.

I would like to digress for a moment and explain the reason why we were designated a Provisional unit, by definition, temporary or conditional. In the lexicon of the Army, this meant that we did not officially exist. The Recon Platoon was not an authorized organizational unit of the 11th Airborne Division. Therefore, members of the Recon Platoon, for administrative purposes, were assigned on paper to various units within the Division. We become the ghosts, the "Snooper," men who weren't there. The Platoon was the brainchild of General Swing, who wanted a small, well-trained, all volunteer unit to deploy as he deemed necessary, without explanations. Our liaison was Lt. Col. Muller, the Division G-2. The Platoon was composed of 30 enlisted men, of which three of us were Non-Coms and one officer. However, at the time of the Los Banos Raid, we were down to 22 men. We were informed at the outset, that no promotions in rank would be forthcoming, and sure enough none were. The Army's recognition of General Swing's wisdom and foresight led to the authorization of a Table of Organization and the expansion of the Recon Platoon to full Troop size near the end of the Luzon Campaign, just prior to our departure for Okinawa.

The Mission at Los Banos

The Recon Platoon was assigned three important tasks: Mark the landing zone. Mark the drop zone. Neutralize the sentries, guard posts, and pillboxes/bunkers for the "B" Company jump that was scheduled for 0700.

My assault team was comprised of troopers: Botkin, Call, McFadden, and myself, together with a squad of 12 Filipino guerrillas. Our assignment was to knock out two Japanese pillboxes. Each pillbox contained a machine gun. We carried one Browning Automatic Rifle (B.A.R.).

Let me state, without equivocation, that, were it not for the Filipino guides, with their intrinsic knowledge of the terrain, the Recon Platoon would have never found our objectives: the drop zone, and the beach landing zone, since we were traveling at night. Traveling overland through rice paddies, taking circuitous routes in order to skirt by the various enemy listening posts and outposts, it took us about 10 hours to arrive at our objective. Just as we crested the bank of Boot Creek, enemy fire erupted at 3 minutes before 0700. This alerted the Japanese gunners in the pillboxes. As we charged the two pillboxes, the first bursts from the machine guns wounded troopers: Call, Botkin, and one of our Filipino guides. By this time, he was our only guerrilla left with our team, as all the others had "disappeared." Nevertheless, we knocked out the pillboxes. Then suddenly a third, unreported machine gun opened fire on us. We spotted this machine gun on a knoll near a large tree overlooking our exposed position. We kept it under fire until "B" Company troopers reinforced us. This threat was then eliminated. To the best of my knowledge, our assault team suffered the only casualties in either "B" Company or the Recon Platoon.

I appreciate this opportunity to explain in succinct terms, the birth and existence of the Recon Platoon. We, the liberators, have in the past, sometimes have been referred to as "Heroes." I disagree. The true heroes/heroines were the internees and the 12 POWs, the U.S. Navy Nurses. These courageous people did not give up. They survived almost 1,200 days of incarceration, which emphasizes the invincibility of their spirit. Their faith in the United States and it's Armed Forces remained unshaken. This, to me, is true heroism.